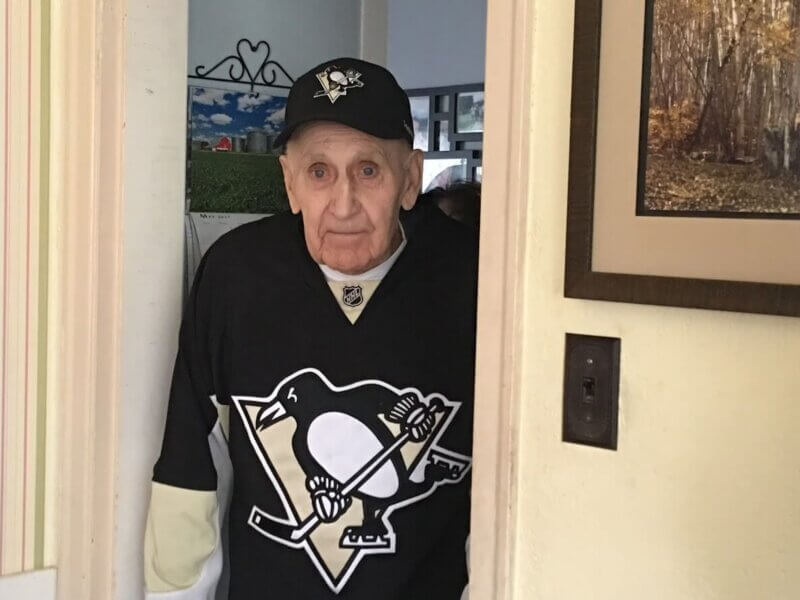 My father-in-law, Maurice Burke passed away on Jan 24, 2021. He passed away at home at 90 years old of natural causes late at night surrounded by his wife and daughter.

In the time since I’ve had some thoughts about what I learned from him. For the past, 10 years or so Della and I have spent at least a month in Williams Lake.

We helped around the house and yard where we could. The Burke’s have been in that house for over 50 years so some maintenance was needed. Maurice was having some mobility issues so he wasn’t able.  One task we took on with Thomas and Patrick was building a new fence.

I’ve never been comfortable around hand tools so I was not sure what I could do. However, we dug out Maurices saws and tools and got to work building hundreds of pickets from scratch.  Weather permitting Maurice oversaw my handiwork. When school and work permitted Thomas and Patrick also lent a hand. It wasn’t long before we had a production line going. It may have taken most of the summer but we got it done and it looks pretty good. After that experience, I had to get my own set of power tools and take on a lot more repairs in our own home.

Maurice was a wonderful story and joke teller. He told lots of stories of growing up in Kelowna and of working as a truck driver in most of BC. From him, I learned to be less serious. I wonder if his love of storytelling lead me to our local Museum and re-telling stories of local history.

The cards his family has received about Maurice’s impact has been inspirational. It shows the depth of the impact he had on the people around him.

I’ve attached his obituary written by his grandson Thomas and the rest of the family.

Maurice was the fourth child born to Oswald and Kate Burke in Kelowna BC.

Maurice moved to Williams Lake in 1954, where he began his proud and beloved trucking career. He travelled many places, made lots of stops, had a lot of laughs and made lots of friends along the way.

Maurice drove for many great people hauling lumber and moving machines around the Cariboo Chilcotin and places beyond up until he bought his first truck in the early 70s to which he started his logging truck company Maurice Burke Contracting.

Blacky drove up until he was 70 years old but continued to help Pat and Wayne at the shop maintaining the trucks. The company now Maurice Burke & Sons has just the one truck operated by Ross.

It didn’t matter who you were or where you came from, Blacky always had a joke or a good story to tell. Many friends liked to consider him family and that’s just how loving and caring Maurice was. His infectious smile and powerful laugh will never be forgotten. Forever in our hearts.

There will be a celebration of life when we can gather together at a later date.